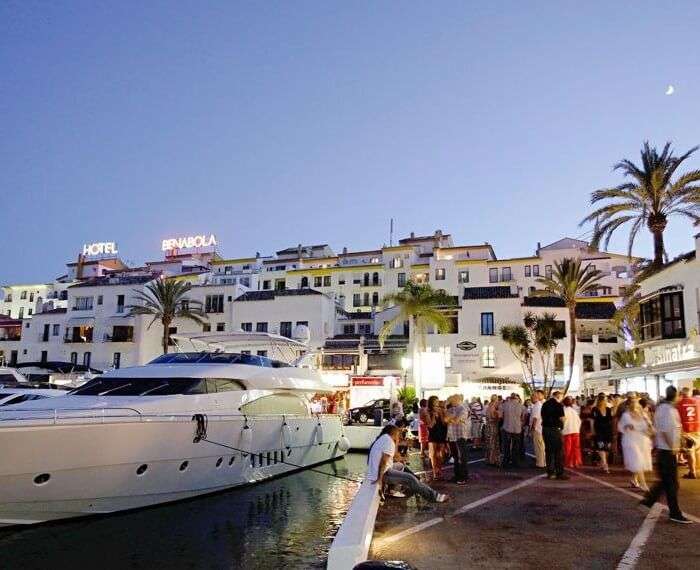 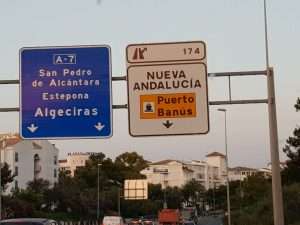 Puerto Banus is the home of the rich and famous. It is a 55 minute drive from Malaga airport with malagaairporttransfers.com.
It is a relatively new town built in 1970 by a local man from Marbella called Jose Banus, a property developer by trade.

The real name for this 1970s town is Puerto Jose Banus but simply known as Puerto Banus. Jose Banus was a close friend of the Spanish dictator Francisco Franco. It was Franco who advised him that he was not in favour of a new port with tall apartment blocks that would attract hundreds of rich families. He was more in favour of a white wall village in typical Andalucian style. Needless to say Jose Banus took Francos advise and he became in future years the biggest property developer on the Costa del Sol.

During the mid 1980s Puerto Banus was the place to be seen. It attracted the rich and famous and some of the biggest yachts in the world.

When Puerto Banus first opened in 1970 it would take 90 minutes to reach from Malaga airport due to having to drive on the coast road. Then in the late 1980s a toll road was completed from Benalmadena to Marbella, which if used will cut the transfer time down to 45 minutes when using malagaairporttransfers.com

Figures from the Spanish tourist board show over 4 million people visit Puerto Banus every year.
Puerto Banus has many top class hotels. I list a few I have used over the last 27 years, the Hotel H10 Andalucian Plaza, Hotel Pyr, Sisu Boutique, Benabola Hotel and Spa, Gran Hotel Guadalpin, Hotel Melia Banus, Hotel Park plaza, Hotel Blue Bay and Hotel Cortijo Blanco and have never had any problems with any of these accommodations.
Puerto Banus front line is all restaurants, bars and designer shops with the likes of Gucci, Versace, Christian Dior, Rolex, Dolce and Gabbana. The second line is nearly all night clubs and bars.

A regular visitor to the area is Abdullah Ben Nasser Al-Thani who is a Qatari Sheikh. He proposed to build a development on the scale of Puerto Banus to the east promising to invest over 500 million euro. This would include a marina to be able to accommodate cruise ships at this moment in time plans have not been approved by the government.
Don`t forget malagaairporttransfers.com can pick you up at Malaga airport and transfer you to Puerto Banus and return for 8 persons for a total of 170 euro. We also include free child seats if required. Why not book your pay on arrival transfer by clicking here.